After beginning his career with the Polk County Sheriff’s Office as a dispatcher, Grady Judd quickly progressed through every rank – from Corporal to Colonel.  As a small child growing up in Polk County, Grady had dreamed of being Sheriff.  In 2004, Polk County overwhelmingly elected him to serve as their Sheriff, fulfilling that childhood dream.

Sheriff Judd has earned higher education degrees through the Masters level and has graduated from the FBI National Academy, as well as several other prestigious law enforcement academies, and has taught 23 years at both the University of South Florida and Florida Southern College.

Protecting our children is Sheriff Judd’s driving passion, and his partnership with One More Child to aid victims of human trafficking is of utmost importance. His passion for providing opportunities of change for those in the community seeking restoration transcends the streets. Within the Polk County jail facilities programs like JASA and Helping Hands offer hope to addicts and provide resources both during an inmate’s incarceration and their transition into becoming a productive citizen.

He is currently the Immediate Past President of the Major County Sheriffs of America, a national organization serving counties with a population of 500,000 or more.  Grady realizes that having proper priorities in place is important to success.  Faith, family, and the men and women of the Sheriff’s Office along with the citizens of Polk County are the priorities that direct his life.  Grady has been married to his wife Marisa for 47 years, and has two grown sons, and twelve grandchildren. 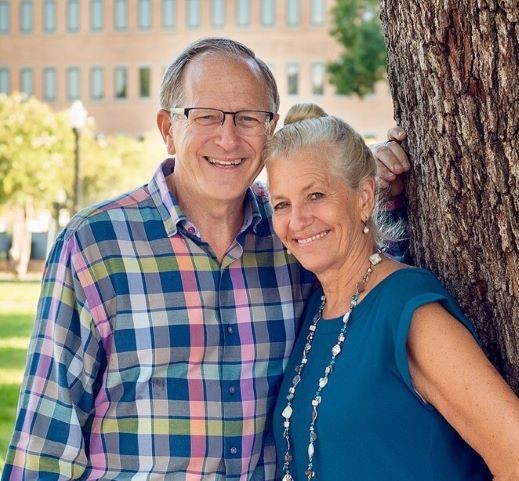 Bill was born in Indy and met his Colorado wife, Pam, at CRU’s California HQ after they graduated from college in 1976.  Bill majored in Finance & Marketing at Indiana University, and Pam graduated with a PE Major / Dance & Fine Arts Minor from the University of Northern Colorado.  They have 12 children, 22 grandchildren, and love the dynamics of a large family!  They are celebrating their 41st year of marriage.

Bill is serving or has served on many civic, educational and business boards as well as consistently within his local church.  He is the Mayor of Lakeland, Florida.

Pam has served on the YMCA Board and United Way’s Success by Six Task Force and is a passionate Fellowship of Christian Athletes Board Member.  She has led many women’s Bible studies in their home.  At one time or another, Pam homeschooled all her children.  Their kids’ college selections have included: 1 Boilermaker (Purdue), 6 Gators, and 3 Southeastern University Fire students.  Pam also began a Teen Conference called Culture Rock.

Vocationally, Bill was involved in automotive parts, truck parts & services, and consumer electronic products businesses in the Midwest.  After moving to Florida from Indianapolis in 1996, he became President & co-owner of Lakeland Automall.  Following the dealership’s sale in 2014, Bill became a partner in a new company, Greenovative Homes, which marketed & installed energy-efficient Greenstar Panels.  Following that venture, he has served as a consultant with Claridge Associates.

The Mutz’s are no strangers to adversity. Their second son, Jonathan, drowned at seven months of age, their 12th child, Emma, has Downs Syndrome, and two of their grandchildren died shortly after birth. Despite moving through difficult life events, Bill & Pam are certain of two truths: God uses ALL things together for good to accomplish His purposes! And, there is NO WASTE in God’s Economy!

Your shopping matters. This Father’s Day, shop for Dad at smile.amazon.com and Amazon donates to Tri-County Human Services Inc.

Your shopping matters. This Mother’s Day, shop for Mom at smile.amazon.com and Amazon donates to Tri-County Human Services Inc.

(If you live, work or attend school in Polk, Highlands, or Hardee counties)

If you would like to make a payment for a bill you received, click the button below:

Become a Board Member

Every charitable organization or sponsor which is required to register under s. 496.405, F.S., or is exempt under s. 496.406(1)(d) shall conspicuously display the following statement on every solicitation, confirmation, receipt, or reminder of a contribution: “A COPY OF THE OFFICIAL REGISTRATION AND FINANCIAL INFORMATION MAY BE OBTAINED FROM THE DIVISION OF CONSUMER SERVICES BY CALLING TOLL-FREE WITHIN THE STATE. REGISTRATION DOES NOT IMPLY ENDORSEMENT, APPROVAL, OR RECOMMENDATION BY THE STATE.” The statement must include a toll-free number and website for the division that can be used to obtain the registration information. When the solicitation consists of more than one piece, the statement must be displayed prominently in the solicitation materials. If the solicitation occurs on a website, the statement must be conspicuously displayed on any webpage that identifies a mailing address where contributions are to be sent, identifies a telephone number to call to process contributions, or provides for online processing of contributions.